Why Should Small Businesses Be Interested in Press Releases?

And especially, why should small businesses be interested in OUR Press Release Service?

After all, we ONLY commit to handling 6 – 10 Press Releases per month, world-wide! Will you be one of the takers?

1. Why you should be interested – why Press Releases are extraordinarily powerful – Read on!
2. What stops Press Releases just short of being Perfect
3. Exactly what we’ll do for you, if you qualify —
so you get the most of (1) and the least of (2)
4. What more you could choose to do, after your press release is published

(This video walks you through a whole stack of benefits.)

Be aware — Press Releases today are NOT what most of “traditionally” think about. They are not written and published hoping that some journalist will be interested and run with the news — although it’s great when that happens. No; they are FAR more powerful.

A well-prepared and well-written Press Release published and distributed through a high quality Distribution Network — all of which I take care of for you — has an astonishing range of potential benefits for a small business. With no downside.

You can get your company name, brand, products or services in front of a LOT of people on the Internet, very quickly, carried on web  sites with VERY well known, high-authority names. Instant credibility. Far more credibility than an “advertisement.” A different level altogether.

And that Press Release can receive hundreds, even THOUSANDS of views. One I wrote for a Realtor in a small city — pop 140,000 — received more than 6000 views, for example. And that doesn’t count the views that same Press Release earned from being “picked up” by close to 100 online news sites and being featured in Google searches for scores of search terms!

A Press Release can get your company name, product, brand or service “ranked” on Google Search Page 1 for an important search term — one so competitive that your web site isn’t there even after years of trying — and be ranked WITHIN HOURS! Seriously!

If you know ANYTHING about “Search Engine Optimization” or SEO, you realize that what I just said is mind-boggling. Businesses spend thousands or tens of thousands of dollars to get ranked on Google Page 1, and it can take months, even years. Then you publish a Press Release and leap-frog them in a few hours.

Now, if it’s a very competitive term you might not stay there for long; days, perhaps, BUT sometimes weeks, sometimes months. And there are things you or we can do to try to extend this as long as possible.

Because a press Release links to your web site (usually) it can “boost” your own web site’s rankings. Because it carries your company name, address and phone number, every “pick up” by an online news service can act as what Google calls a “Citation” — essentially, communicating to Google that your business is earning some serious attention.

An effective Press Release can make your phones ring, get foot-traffic through your door and internet visitors to your web site.

And to make the multiple benefits even better, almost no-one who doesn’t work with Press Releases regularly, understands them. Or what they can do. Or how to do them. ESPECIALLY at the small business level. Which means that your competition is almost certainly NOT taking advantage of them.

Now, I don’t know what you already know; so please bear with me if I get a little too basic.

People think you have to have a big-deal newsy “thing” going on, to justify a Press Release. Not true. I have lists of more than 100 “triggers” for  Press Release. There is ALWAYS some reason we can use. Always.

Just one single Press Release can bring you a host of benefits. This is especially true if you are in a small community — population under 250,000 for example — but true even for multi-national conglomerates.

But there are other strategies, too. Some businesses will release a couple of different ones aimed at getting “picked up” and ranked for very different search terms to get bigger-blanket coverage. Some businesses launch monthly Press Releases (especially when they see the benefits first-hand) to obtain “stacked” benefits.

Click here for examples of some viewing statistics or click the image below to enlarge in a new window. 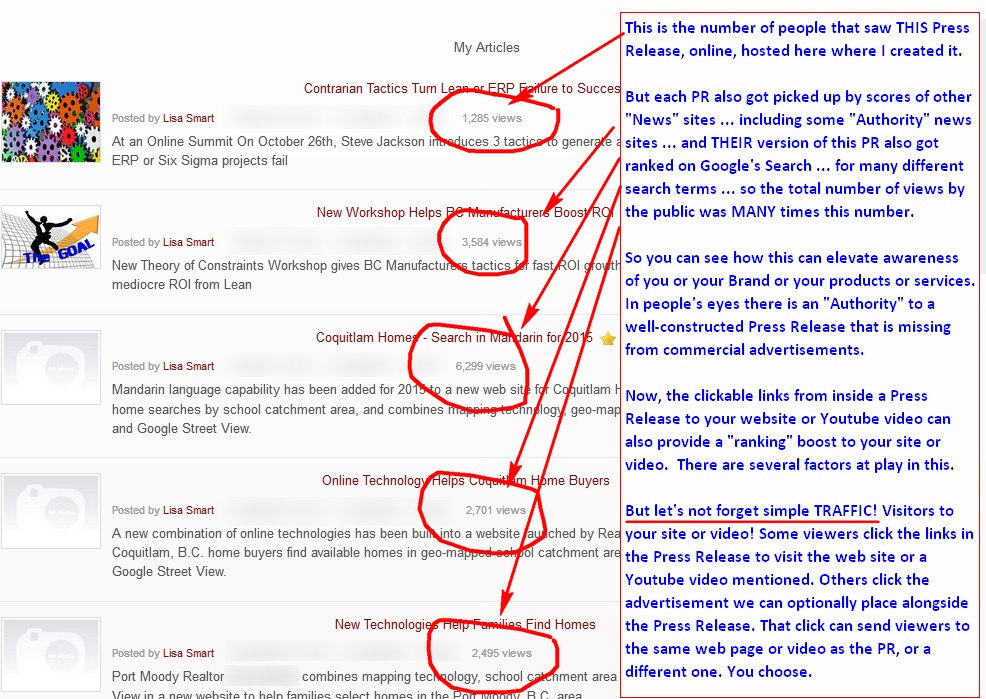 The people who see you listed when they search on the ‘Net see your business in a whole new way; one that has “authority” — your business automatically is given a great “posture.”

When your Press Release is “picked up” by well-known news organizations ome of that authority and credibility automatically rubs off on you.

Click here to see a sample list of the types of organizations that “pick up” your Press Release and publish it online. It’s impossible to predict which one will pick up any particular Release, but the value of going through a high-quality Publisher and Distribution Network is that the news organizations TRUST these Distributors. They automatically get attention.

Click on the image below to enlarge in a new window. 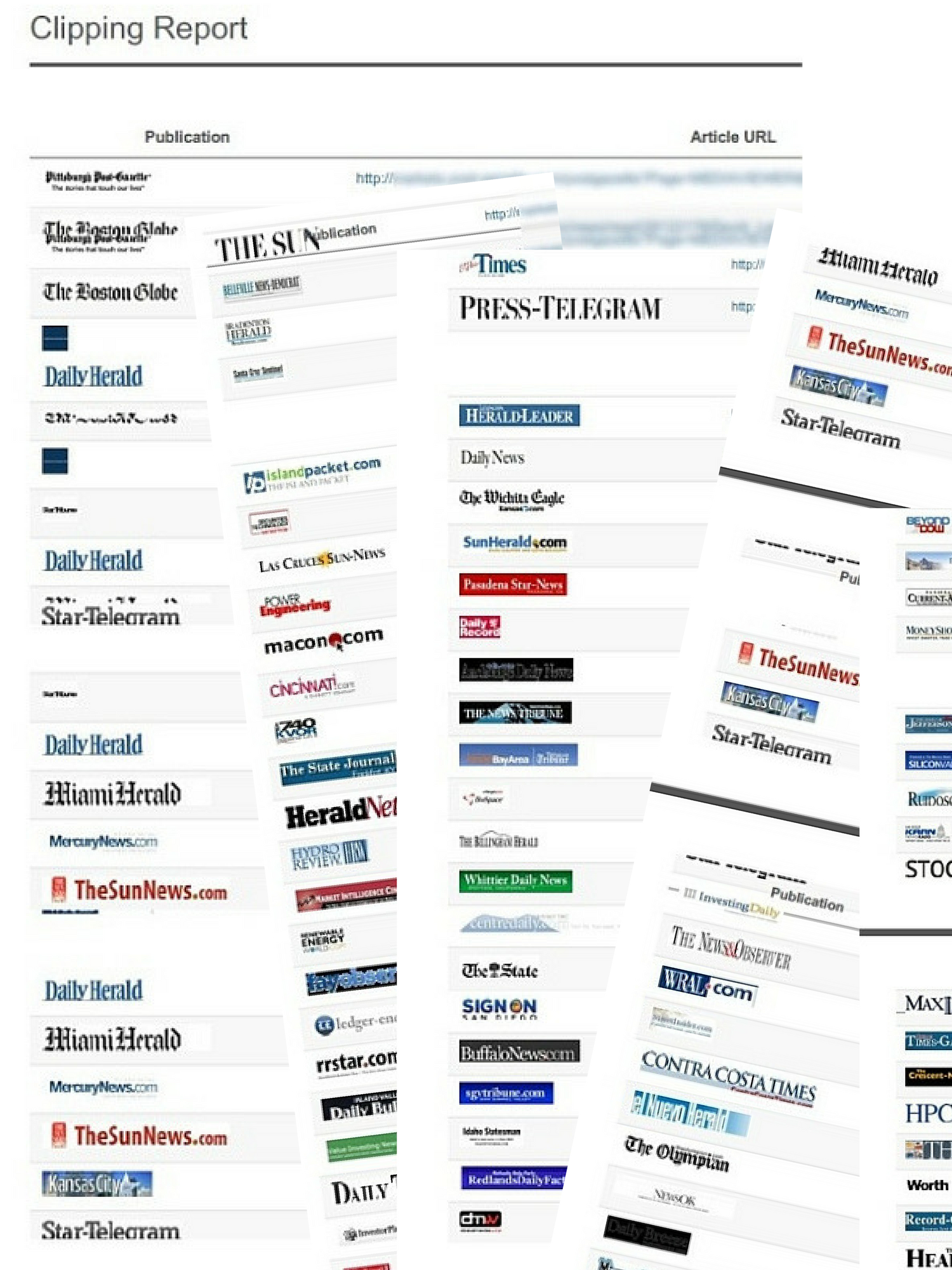 Capitalizing on the “borrowed” authority of these online news organizations, and the hundreds and thousands of views, a well-written Press Release provides solid information but also deliberately creates a curiosity to learn “more.” Where the ONLY source of that “more” is to visit your web site or call you or visit your store or your business!

Click here to see an example of how a Press Release looks – on the Publisher’s site, it can have different appearances on the sites where it’s picked up, of course. You’ll see how there can be more than one way to get “clicks” (visitors) to your web site.

So; hundreds or thousands of views, “borrowed” authority, great information that makes you sound good and positions you the way you want to be positioned, AND curiosity whetted.

You might be doing this just for publicity. But often, of course, the real aim is more traffic, more visitors, and ultimately more sales. No guarantees — but if you are normally good at making sales via your website or incoming calls or foot traffic, then doesn’t it make sense that increased “traffic” will convert to increased sales?

Sometimes just a single sale provides a huge ROI – one Realtor client for example earns many thousands of dollars from a single sale.

Sometimes it’s lifetime value that matters — a customer for dental or chiropractic work, or accounting or legal work, a plumber or mechanic who proves trustworthy, can be worth a LOT of money over the years they stay with a business they find via a Press Release.

And sometimes it’s sheer volume — a Press Release announcing a “hot” new product is in stock can generate significant sales from the publicity.

Now, to be clear: some changes Google has made in recent years diluted the sheer ranking boost for a web site from a Press Release that gets picked up scores of times, even 100’s of times.

But the operative word is “diluted” — the impact can still be significant and there are associated other benefits for Search Engine Optimization, too. (SEO).

The SEO side of things needs a little understanding of how “Rankings” work. Google (and Bing) examine every web page on your website and decide where that page of your site “ranks” in competition to others. So for example, a dentist in Margaritaville might have a website. One page in that website talks about dental implants. Someone in Margaritaville might search in Google for “dental implants margaritaville” and this particular dentist’s page might be ranked 5th from the top. Other dentist’s web pages are in positions 4,3,2 and 1. Typically, all these will be getting more “clicks” from searchers than position #5.

Well, here’s where things get interesting.

When you publish a Press Release, a whole host of organizations who are in the business of “news” jump on that Press Release — if it’s well written — and THEY publish it on their web site. You can literally get 100+ and sometimes several hundred different organizations and major media outlets publishing your Press Release.

AND, not all but many of those re-published Releases still have the “live” clickable link back to your web page.

So a single Press Release can get you 100’s of new links to your web page. Many of them from high-authority sites. Even just a single Press Release can sometimes (not always) have a big impact on the ranking of your page of your web site as a result of what seems to be an endorsement of your page from many high-authority sites.

Do you see the picture?

Some companies will release a Press Release every month because sometimes it’s the CUMULATIVE “stacking” effect of all the links and all the authority that creates the Boost.

Now that I’ve explained this, let me go back to two of the other benefits: More awareness of your business, your brand, your products and services; and more traffic to your website or to your business.

Because there are even more benefits from what I’ve just described.

First of all, there are likely to be some search-phrases (keywords) that are very competitive in your market place and where, realistically, your own web site will probably never be ranked by Google.

So, you can often get a Press Release, featuring YOUR BUSINESS, raked on Google Search page 1 for those very keywords! AND while it might take you MONTHS of SEO work to get your own web site there, the Press release can often be on page 1 within 24 hours. 24 – 48 hours is common.

I need to be very honest with you here — that Press Release might not stay on Page 1 for long, maybe days, maybe hours — but even that short exposure on P1 of a popular search term can bring a LOT of views and a lot of traffic.

But this is STILL not the whole story.

So instead of having a single web page ranked for a few keywords a Press Release can get you scores, even hundreds of rankings. That means that people searching for all sorts of things will find your Press Release on Page 1 of their search.

And it gets even better!
It’s not unusual to find that for a certain search term, where your own site can’t get ranked at all, suddenly your initial Press Release is, for example, in Position #3. BUT another highly authoritative news organization also picked up the Press release, it’s on THEIR web site and it’s ranked #4! And ANOTHER highly authoritative site has you … and is ranked #6! And so on.

All of which can contribute to blanket exposure and massive exposure; how big, is obviously dependent — but the one thing you can be sure of is, MASSIVELY more exposure than your web site gets!

Why Press Releases are not quite Perfect